When my company and I were planning this 14-day south to north Vietnam trip, we knew it wouldn’t be complete without experiencing Vietnamese trains. When the French built a colony here, much like any other European super power of their time, they brought railroads with them, as it is one of the most functional forms of logistics and transportation. I presume these trains would have been state of the art in their time. It had the air of luxury for the first class cabins with their butlers and buffet cars. And that industrial look of the coach which of course, the rest of the blue collar masses had to partake in. When the French left, the trains continued on , much of it the same with what they used in their good days here. With a little research and visuals, we have formed a brief but solid idea of the current state of these trains, and the conditions of taking them as our main source of transportation. It would have taken almost 2 days of a train ride marathon to reach Hanoi from Saigon. With the figures in hand, we counted how much water consumption versus visits to squatting toilets. If shower is even possible, would it make us cleaner than our previous unbathed states? Or are those couchettes worth the bites? It was then that we decided to cut the trip in half by taking a domestic flight from Saigon to the city of Da Nang, located in central Vietnam. A strategic point, from which we can cut the train ride ordeal significantly.

When we arrived Da Nang airport after an early morning flight from Saigon, we were glad to have made arrangements for transfers to Hoi An, A UNESCO world heritage site in central Vietnam, instead of having to bargain with drivers at 7 o’clock in the morning. From Da Nang airport en route to Hoi An, we would be able to visit the famous marble mountains of Da Nang. There will be some exquisite marble carvings lined up below every mountain, just before the entrance, tempting the most impulsive tourists to ship larger than life sizes of these marble carvings. These five marble mountains spread around the city are more like larger hills. It should not intimidate the most out of conditioned travelers, there is a lift for a nominal fee, if you don’t care to walk. There are pagodas that dot each mountain, small caves that may open up to buddhist idols carved out straight from the mountain itself. For the curious kind with keen eyes, there will be lots of small pathways veering off of the provided map, some will be your most rewarding lone moments because these mountains are quite touristy. But the most rewarding view would be once you get to the peak of the hill and enjoy a 360 degree view of Da Nang. Mountains on one side, and the seemingly interminable coastline of Vietnam on the other. From the time of visit, there have been lots of on going construction of what seemed to be chain of hotels along the coastline. I can only imagine how this pristine area, with its white sand and near perfect shores will be the next hot spot of tourism for Vietnam.

Off the map walkway

Marble statues carved out straight from the mountain

Made it to the top with my guidebook! 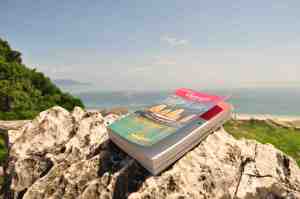 Upon arrival in Hoi An, we decided to stay in nearby Cua Dai beach that’s lined with hotels fit for a James Bond villain. After all, we have spent some rough but fun times during the previous half of our trip. Hoi An is nicknamed “The Venice of the East”, for its beautiful river streets and historical significance of being a wealthy trading post, giving this town an air of wealth and grandeur. The Portuguese settled and traded here too. Its got a preserved architecture and grid city street planning. Buildings are indubitably similar to each other, a whole town filled with old Chinese and Vietnamese houses, now in their antiquated yellow-washed but intact walls, the reason that it has become a tourist attraction. But what I really like about Hoi An is that it still remains a place for locals to live in. They have not been gentrified by negative aspects of tourism. Local industry is still intact. You will have some of the best tailor made silk clothing here as you will see from every tailoring shop. There’s also some good food at cheap local prices to be had from those stalls lined up across the river, apart from the more established restaurants within the town.

Night swim in our hotel 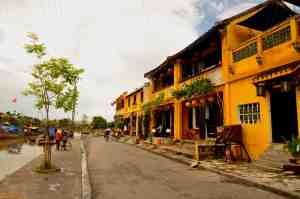 Hoi An at night 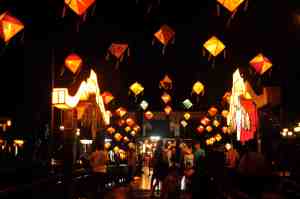 After recharging for a couple of nights, we were ready for the next half of the adventure. From Hoi An, we made a short stop in another Cham kingdom relic in My Son en route back to Da Nang, from where we are taking a famous, afternoon scenic train ride to Hue. For our first train ride in Vietnam, we were expecting something quite worse than what we actually experienced. The train cars have definitely come from the French era, but apart from old carpets, worn, funky smelling seats, universal dusty curtains and a distinct smell of dried fish brought by some suspected passengers, it didn’t turn out as bad as predicted. This three hour train ride goes through coastal railroads, and as the sun sets, unobstructed by the sea stretching into the horizon, it makes for the most glorious back drop. Each tunnel we passed through was an eclipse of total darkness, until a different cove appears, darkness gives way for orange skies, reflecting on undeveloped white sand beaches, sometimes just cliffs that fall straight to the open sea. But my favorite is whenever we cross arched stone bridges as we head for a turn and sneak a photo from outside the window when no official is looking. Its one of the most moving train rides to be had, just make sure you sit on the left side. Over all, I would do this trip again.

Vast My Son relics from the Cham kingdom

Ga could be either chicken or train station 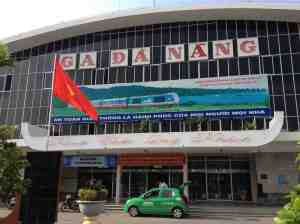 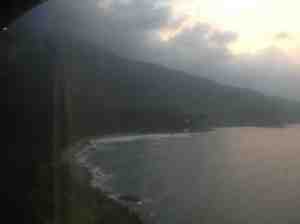 That’s it for now folks! Watch out for our following misadventures in Hue, impending doom of a train ride to Hanoi and the rest of our north Vietnam experiences from the next and final installment of my Vietnam series.

A preview of what happens next

2 thoughts on “Getting deeper into Vietnam”