A mere one hour ferry ride, i cross continents, leaving Europe for Africa. From Tarifa, the southern most tip of Spain, across the strait of Gibraltar, I arrive in Tangier, one of the northern most cities of Africa in the kingdom of Morocco. Upon arrival, much like any port, you wouldn’t want to hang around it for a longer time than necessary. Pestered by touts with all kinds of plots and cons to take your tourist dollar, I rush to get out.

Crossing continents through the Strait of Gibraltar 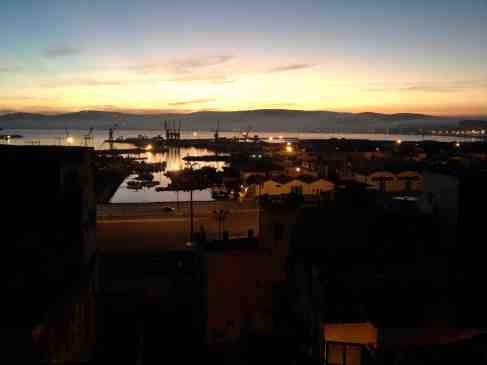 Outside the port, its a totally different world. First thing you see, the white fortified medina walls give you an idea of its historical past. Its strategic military location attracted a lot of colonizing powers of the past.  First settled by the Berbers, a nomadic desert tribe, followed by the arabs, bringing with them Islam which became the major religion of the country.  From there, it has been a battle between Catholic Spain and Islamic Morocco. As a result, with alternating influences between religions, the city formed a look of mixed influences,  built with European fortification and Islamic architecture comparable to the Andalucian region of Spain.

Once inside the medina, identical white washed buildings, cobbled streets, narrow lanes and dark and dirty alleys all conspire against your initial resistance and unwillingness to accept loss of bearing. Acceptance with getting lost is a key factor in making the most out of this trip. With no street names and indistinguishable alleys, it makes for the most futile attempt to get a map. On finding your riad, an islamic version of a hotel, dragging your luggage on cobbled streets, it seems a poor decision refusing all the porting services back at the port. Luckily, Tangier is never short of its infamous beyond persistent faux guides. Bordering on aggressiveness and violence, somehow, they just don’t leave you with an option to refuse.  Eventually, you will understand that ignoring them, or a violent refusal only makes it worse. The best way to refuse an aggressive offer is to stride with confidence, offer a warm smile and a friendly pat on the back.

With the volume of different nationalities of visitors arriving here, Moroccan people have become fluent multi-linguals. Depending onn their location, speaking in Spanish, French, English, Moroccan and Arabic is just expected of them.

Getting casual with a Moroccan

Arriving on your riad, your senses are assaulted with infinitely colorful zuelig, a mosaic of tiles geometrically pieced together, and furnitures of different designs perfectly arranged together fulfilling your Arabian Nights dream. Meanwhile, the smell of aromatic burning argan oil, a sound of flowing fountain from the bright internal courtyard, and a welcome drink of sweet mint green tea, attacks  culture shocked visitors. From the roof deck, or the terrasse , you can hear the distant sound of waves crashing into the outer sea wall as you watch moroccan life through wide open windows, while on street level, determined kids play football on narrow lanes pestering passers-by.

Tangier from our Terrasse 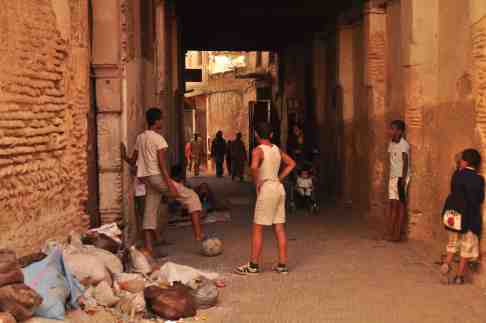 Later In the early 20th century, the French arrived. When Tangier was split by the French, Britain and Spain, it became an international zone or better known as, the inter-zone. Attracting all sorts of people, during that period, it became a center of misbehavior, espionage and political plots. Spies, drugs, more drugs, attracting artists, writers, rockstars, and even a refuge for escaped convicts. These elements amalgamated into one of the most hedonistic parties of their time. In the Petit Soco, meaning little square, it was the city’s place to be. Drug deals, destabilization plots for foreign governments, invitations for debauchery,  it all happened under the limelight of the legendary cafes that surrounded it. In those cafes, mobbed by all sorts of miscreants, it had the air of “anything goes!”

This table has seen those days

Majoon, look it up

Walk around now and if you can look past the obvious dirt and your fears, you will find a city that’s got beautiful buildings kept in photogenic state of disrepair. When the French left and Morocco was granted independence, funding got cut and and like all good things, the party ended. Relics of the past involve everything French, like cinemas, the language, the and big round-abouts. What then of those foreigners  who gave this city such almost notorious character? Most of them left and moved to other party scenes, but there are a some who, either from having nothing to come back to, or simply anchored themselves to deep, decided to stay and make a home out of Tangier. If you’re lucky, listen to their treasured stories as you try to bring the party back to life in your imagination. It can be charming to some, a horror for others, but its always misfortunes and misbehavior that make for the best stories.

Walking around the medina 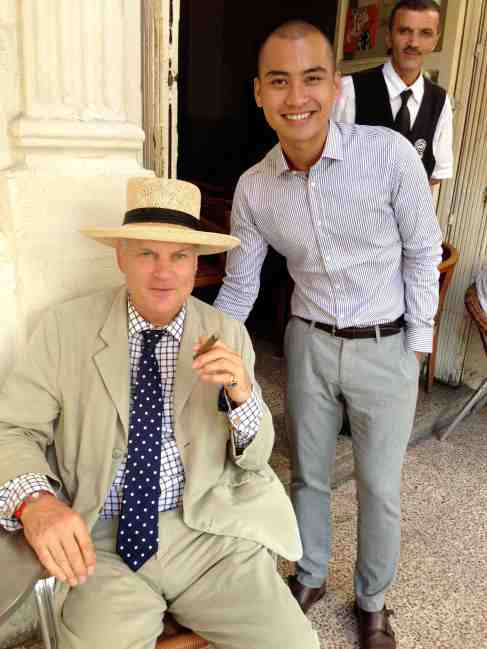 Overall, Tangier is now a Moroccan city but definitely with a different character from the rest of country, making for a perfect gateway to a country of vast landscapes and diverse scenery.

Diving into the country side