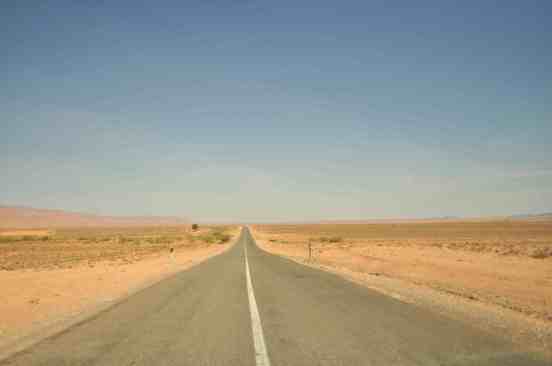 Ahh. Road trip.. life on the road, filled with new experiences, spontaneity, getting lost, and finding your way back, its very exciting! The romantic feeling of rolling down your window, one hand on the wheel, the other holding the hand of your amazing partner (if available), or if not, a can of Coke  (bullshit let’s admit it, its beer!). Wind and dust blowing while you cruise along a road framed by mountains, fields of corn, the occasional adobe farm house, it stretches until the very end of the horizon. 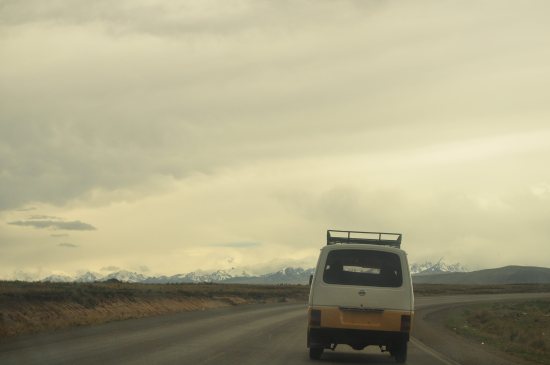 On the road, when the journey is just as fun as the destination, it does feel nice to just sit and watch the world go by as if it were some silent movie directed by God. 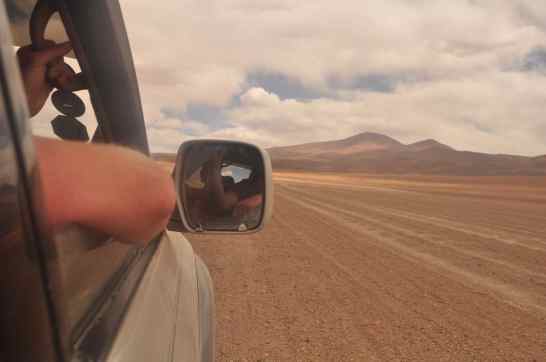 Road trip! It’s the epitome of adventure and discovery. We’ve all had this. When you went for camping, after prom, towards the end of your senior high school year, cutting afternoon classes in college, or just time off work. Regardless of time and age, on the road, you are young and free! 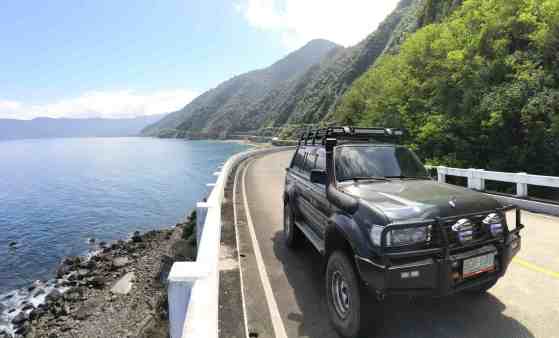 Recently catching up with a couple of lifelong friends sealed by road trips, we relive exactly what elements make life on the road unforgettable and legendary.

The designated official driver, the music director, the accountant, and the sleeping beauty.

It can easily go wrong from the smallest of mistakes, such as missing the last gas station, dropping a nuclear fart, or breakdowns of either car or people. It is important to establish rules. Who gets to ride shotgun, how much toilet stops, or the right to vote to leave someone behind. 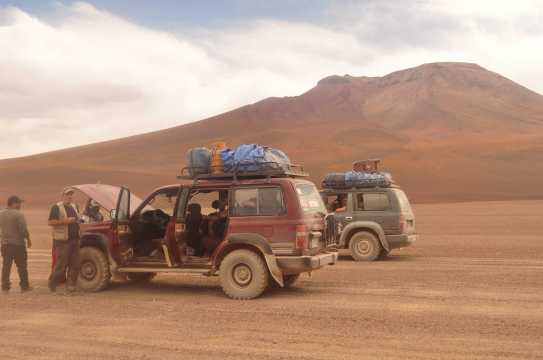 I read somewhere that the only fault in the creation is that someone forgot to add background music to fit special moments in life. You can easily mend this tragic flaw by making a trip defning playlist for every beautiful moment you will have on the road. Trust me, you will have many. Moments looking out the window, moving your head about to the rhythm of music, as if you were part of a B roll of some catchy One Direction music video.

Road trips give a really strong bond to a group

Its spending hours talking, laughing, and singing in chorus to the Beatles and Bob Marley, or simply looking out into the clouds while finding comfort in everyone’s silence. But more than those moments of wonderful shared sunsets or the unnerving sight of hundred foot drops, its about having someone to reminisce and relive that bygone era of excitement. When no one was having a better time than we did, because during those rare moments, we were truly part of something greater than ourselves. 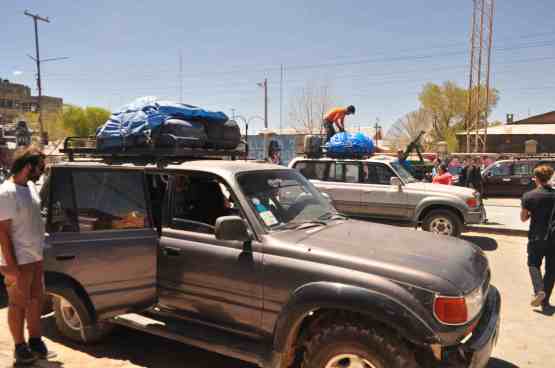 Road trips can be memorable for all the good things, but the bad things make it more interesting.

You will get lost, figure out how to ask directions in different dialects, or that world-falling-apart moment of being left behind when you took so long to pee. It could also be that life threatening moment when you turned on the ignition and the engine took a longer time to start, or when someone opened the window that doesn’t close, they all make the best stories years after, or at least once you’ve forgiven each other. 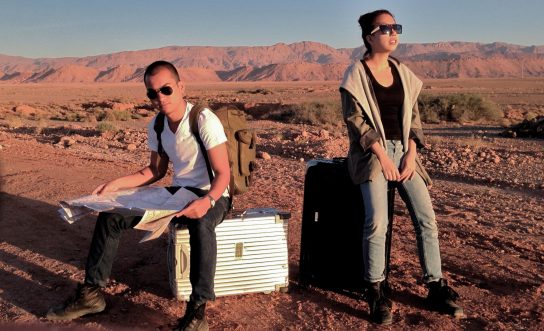 Road trip as summed up by Tiffanie DeBartolo from How to Kill a Rock Star,

“The concept of time, as it’s commonly understood by normal people with normal jobs and normal goddamn lives, doesn’t exist on the road. The nights spread out like the dark, godforsaken highways that distinguish them, and the days run together like Thanksgiving dinner smothered in gravy. You never really know where you are or what time it is, and the outside world starts to fade away. Its cool.”

So find the perfect destination, take the funniest combination of characters, play all the right music, buckle up and drive slow homie! 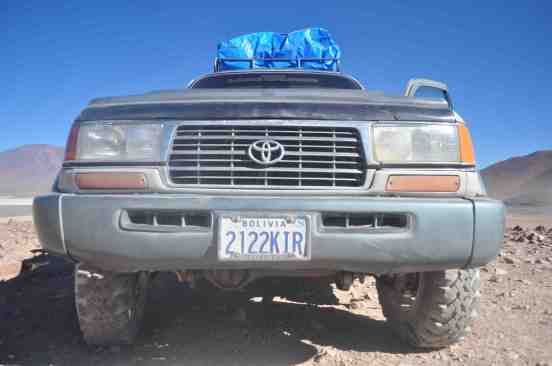 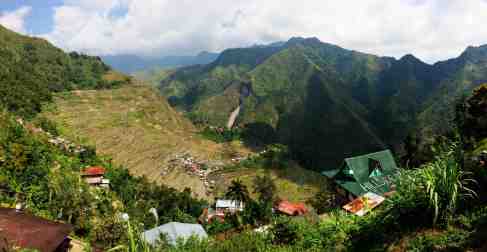 I have always had an interest in quaint villages perched on high lands. Regardless of border, they all seem to share an identity of mysticism and spirituality. People who live in such communities seem to have a better understanding of the nature that surrounds them, like a secret has been passed on from past generations that they can easily trace. The simplicity of their cold bitten faces, their skin, tanned, wrinkled and hard from agricultural labor, in contrast with their enigmatic animist beliefs . What lies underneath that simplicity, there seem to be mystery. Like that universal image of a wrinkled old woman, sitting by the window overlooking the street, staring blankly ahead while smoking a tobacco as her lips move as if in chant or giving a curse.

So when I was bound for the mystical rice terraces of Ifugao, I was determined to ride on my idea of simplicity while giving respect to the spirit of nature that surrounded us. We all know what it looks like, we grew up with that image from our history books, always from that angle which is even printed in our recently replaced 1000 peso bill. So upon ascending the road to Ifugao province, every turn is a hope that the outing would be those green auditorium like rice terraces. And every time it isn’t, disappointment is instantly replaced by awe for those valleys between mountains, the steep drop it would make for a small miscalculation. Driving here, you know you do not get the slightest margin for error.

The road to Banaue 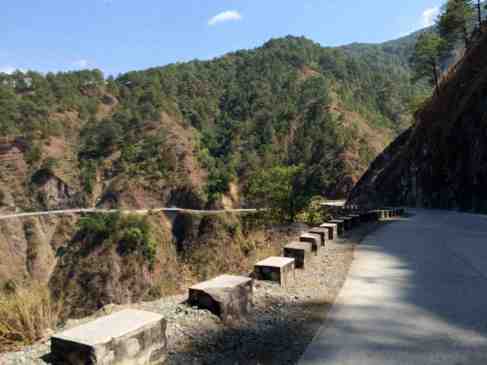 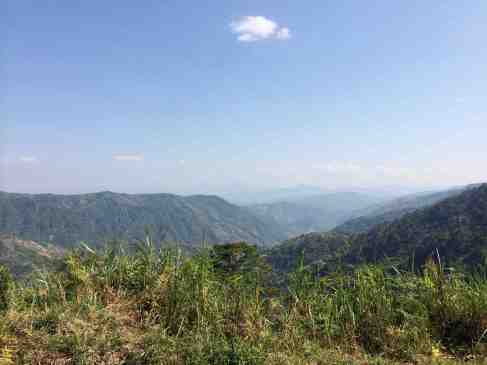 A miserable attempt at trying to piece them together 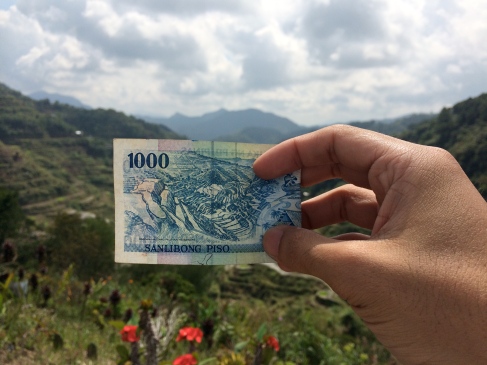 After a few small villages and many blind corners later, we arrived at Banaue, a thriving town funded by tourism from its world famous two thousand year old rice terraces. Albeit a little commercialized for mountain standards, it still gives a quaint feeling, with a few homestays, some restaurants catering for tourists from most parts of the world, and a very helpful tourist information center from which all travelers must register upon arrival. Its the sort of town where you pick up most of what you need, from food and water, to hiking shoes and transportation, before you delve deeper into the region. Staying in Banaue View Inn for a night, nobly located at the top of the town, we had an overlooking view of the happenings down below. The unofficial bus station occupying half of the street, blocking the occasional flow of traffic, while their waiting passengers have only road railings to lean on for comfort, and those last minute shoppers from the busy town square, with everyone seem to be moving about in all directions, we watched over them until everything slowed down as the sun set, giving way to the slowly glowing moon. At night, the town gives a totally different atmosphere. With hushed conversations from obscure faces overcast by dim light, tracing distant foot steps, the feral barking of a dog, it feels like something straight from a Scorsese movie.

The town of Banaue from our balcony 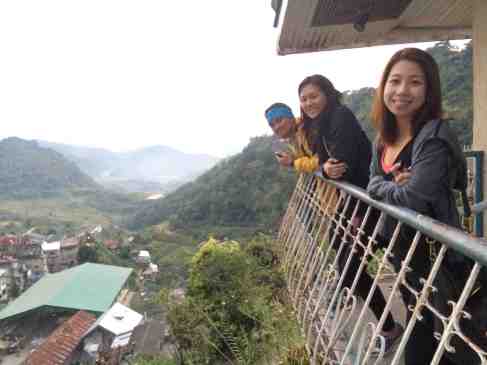 An hour drive deeper into the province is Batad saddle, the end of one of the toughest roads ever. The strenuous incline to this point is still under construction, but its muddy and rocky tracks are open for vehicles who dare. While other travelers have no choice but to rent a jeep with fortified suspension, luckily, our vehicle, a Toyota Land Cruiser from the 1990’s, with its tall vertical clearance and armed to the teeth, is hungry for such a terrain. My driving partner offered to take the wheel, while my girlfriend and I dared to top load. White knuckled from our industrial grade grip on the railings, we were definitely rewarded with spectacular views that will haunt our memories for a lifetime. Upon arrival to the saddle, we gladly parked our tank and refused every offer of a guide for the single track human pathway down to the terraces. 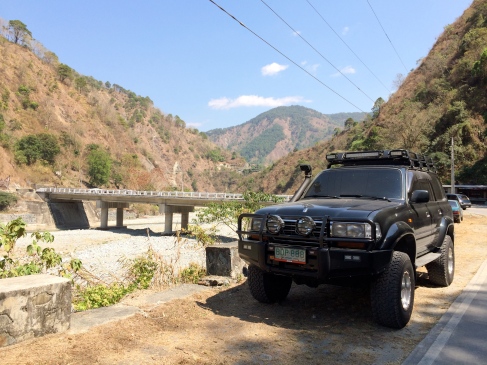 The road going up to Batad saddle 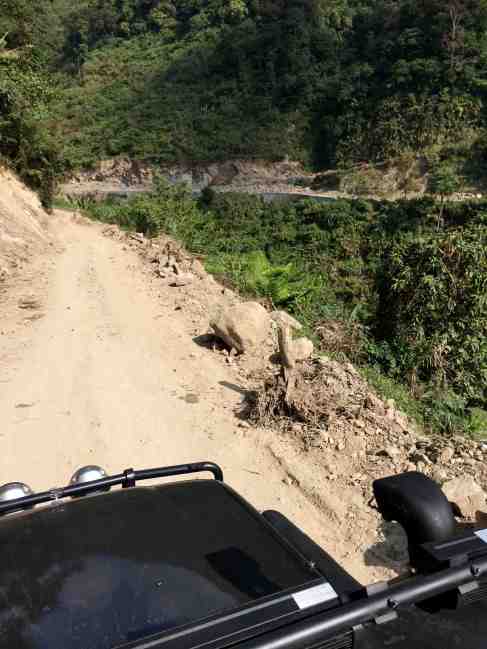 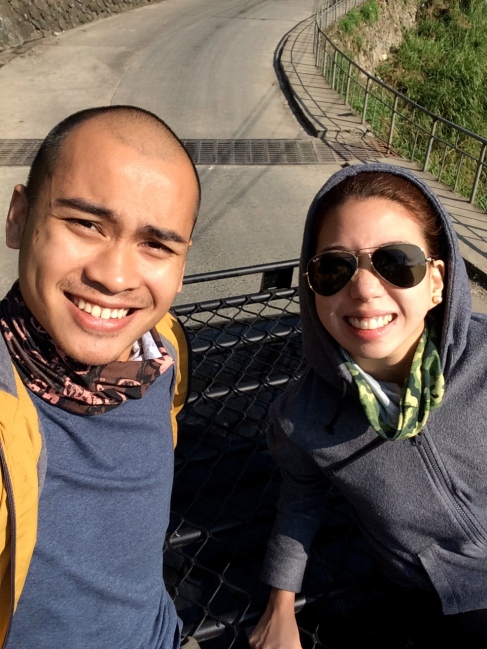 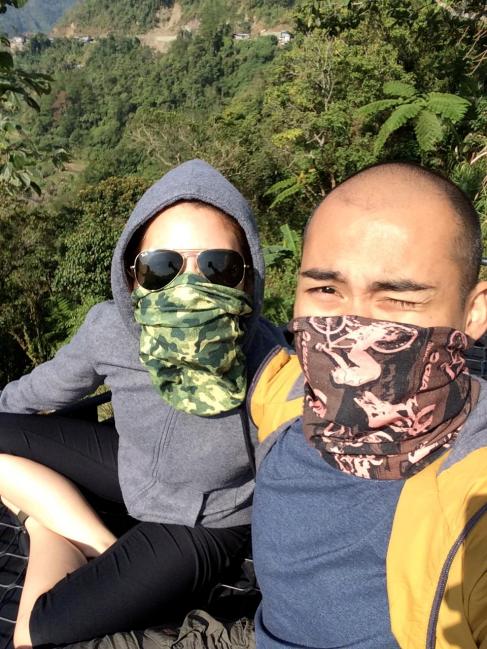 View of a lifetime 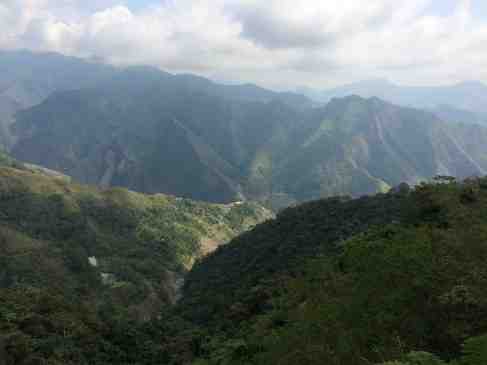 Single track from the saddle all the way to Batad 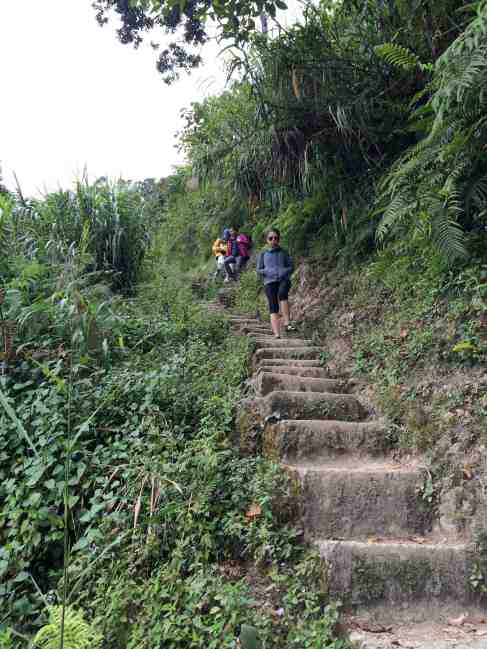 Unlike Banaue, Batad rice terraces is smaller in scale but offers more interaction by being able to hike around its amphitheater like terraces that is individually riprapped with rocks and cement. You can circumnavigate as you watch the locals tilling parches of land. We were advised to hire a guide to take us around the area. He was a short, thin and single middle aged man who lived in one of the few houses that stand on the terraces itself. Needless to say, he outpaced us in our desk job trained mid 20s bodies. Much to our desire to do this on our own, the guide proved to be very essential. With every information he disposed, we gained a better appreciation of the land. He told us that the communal process of planting starts by everyone working on the chief’s land, afterwards, they proceed to the second biggest owner of land and so on until everyone’s land is tilled and planted. It is then time for an end of plantation festival which includes a flooding of rice wine and ill fated live stock. Against common belief, whatever rice that is harvested here almost never gets out, its made for local consumption, and some that do are for souvenir material only. For entertainment, he explained to us that his reason for being a bachelor at his 50s is because in a small community such as this, the slightest imbalance of men to women ratio is a real problem. 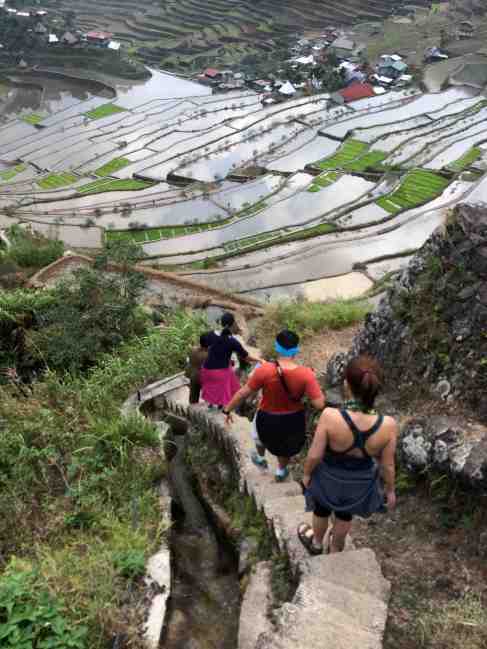 Interaction with the village 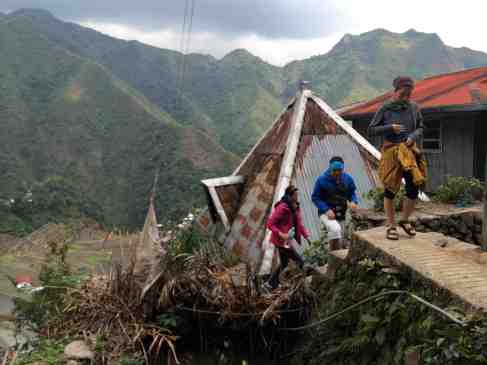 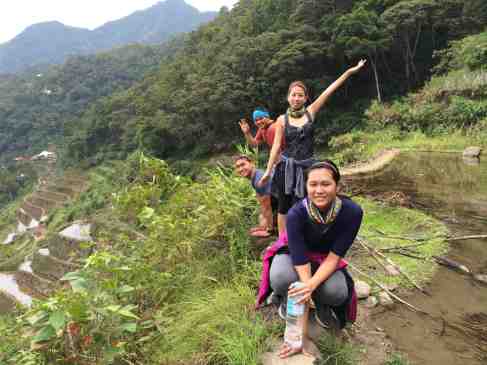 After a short swim on the extremely cold water around the mighty waterfalls, we headed back to our home stay. To say that our room in Batad Homestay is simple is definitely an overstatement. There is nothing in that spartan room that you do not need. There’s the luxury of a ceiling lamp, two beds, 4 pillows and a cozy Ifugao made blanket. There are no 20th century power outlets. You stay in Batad for a couple of nights, and it is impossible not to find yourself regardless if you are lost or not. 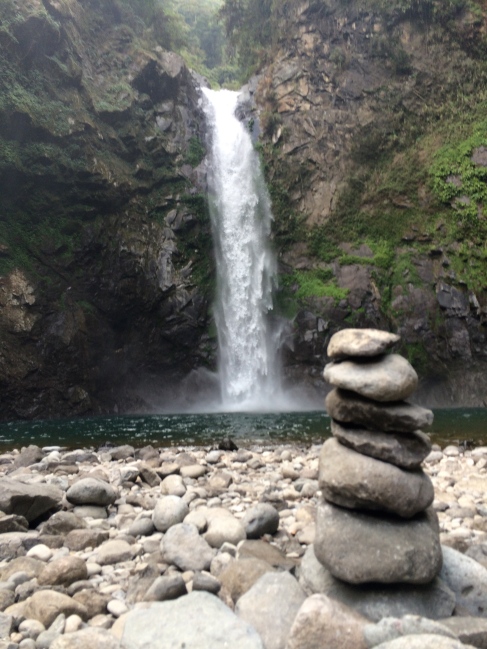 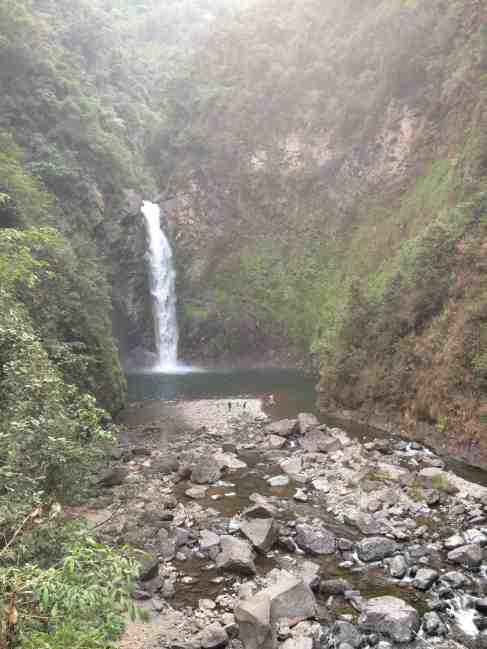 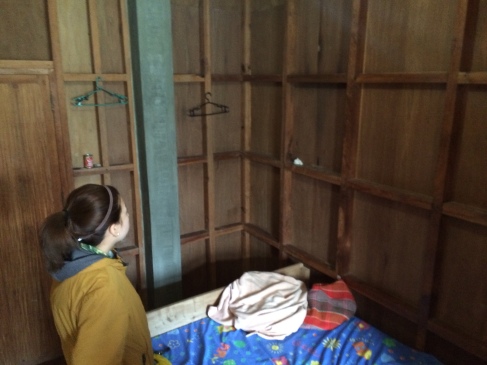 Do you really need anything more than this? 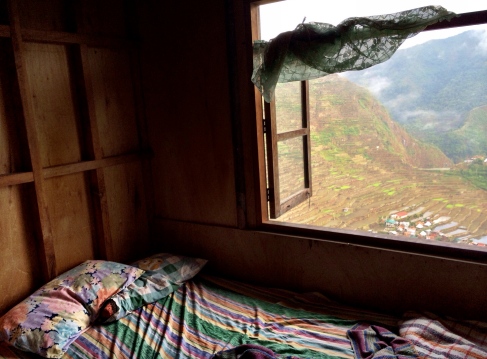 Waking up to a morning covered with fog offering zero visibility, we opted to let it clear out by having breakfast on the restaurant balcony that should be over looking the terraces on a clear day. After all,  our jelly legs were not in a hurry knowing that the 30 minute strut going down here converts to a 90 minute tongue-sticking-out trudge going up. After filling up our tanks with our hefty breakfast, we packed our bags and bid farewell to our reserved but generous host, and to those foreigners who we shared this home with. As hard as we tried to speak French, German and Spanish, a wave of hand was all we could muster. Laughing in our doomed attempt, it was the last thing we had to smile about as we made our ascend, barely making it to the top.